By now everyone is familiar with Obama’s famous statement that he wouldn’t want to “punish” his daughters with a baby if they were pregnant. When observers were aghast at this description, he later tried to backtrack by saying his two daughters are “miracles.” Let’s see if we have this straight – his daughters are “miracles” but his grandchildren are “punishment,” depending on when his “miracles” might be pregnant. Wonder if his daughters don’t want to be “punished” with a baby when they are 30, not 13? After all, Obama supports abortion at any time for any reason.

Are there any babies he likes? He surely doesn’t care about the ones in the womb. Doesn’t want lifesaving treatment for the ones who survive abortions. Parents shouldn’t be notified if their “miracles” want to have an abortion. It’s okay if a stranger takes someone else’s “miracle” across state lines to avoid a state law which requires parental notification or consent. Pretty to easy to sum all of this up – babies are not his favorite people. 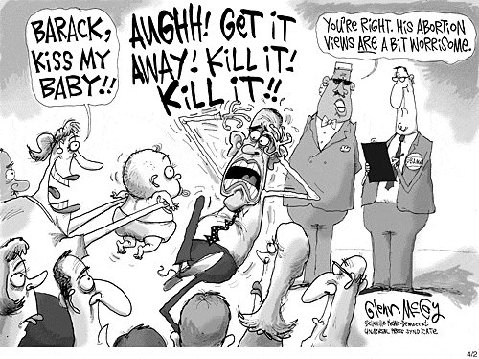