Almost every time abortion advocates speak, their words seek to deceive. From distorting the truth to outright lies, they will say almost anything to protect their lucrative abortion business.

This fact was made crystal clear yet again in early June when the Wisconsin Alliance for Women’s Health began a “five-figure” (according to their press release) ad campaign to promote abortion as “safe, quality care.”

The basis of their campaign is a March 16, 2018, report from the National Academies of Sciences, Engineering, and Medicine (NASEM) entitled, The Safety and Quality of Abortion Care in the United States. The overall theme of the report is that abortion is safe for women and that Wisconsin’s protective, pro-life laws are making it dangerous. This supposedly “non-partisan” report is riddled with misinformation that the Wisconsin Alliance for Women’s Health is promoting with abandon. 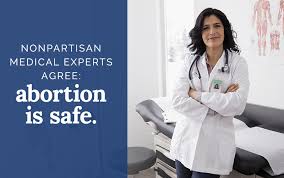 The NASEM study is hardly non-partisan. A cursory perusal of their news releases on “reproductive health” reveals that they never shy away from promoting abortion. The “non-partisan” claim is even more laughable due to the fact that the March report was funded in part by the Susan Thompson Buffet Foundation.

The Buffett foundation was established by billionaire abortion advocate Warren Buffett in the 1960’s. Buffett renamed it the Susan Thompson Buffett Foundation for his wife after her death in 2004. It is common knowledge the primary goal of the foundation is to protect legal abortion through a series of secretive grants. Inside Philanthropy said of the Susan Thompson Buffett foundation, “The place is a case study in non-transparency, and it’s super hard to even figure out who’s doing the grantmaking…While you can understand why a foundation that is deeply enmeshed in protecting abortion rights might want to keep a low profile, this seems excessive.”[1]

A “non-partisan” study funded by a secretive, pro-abortion foundation doesn’t pass the straight-face test. As a result, it’s no surprise that NASEM’s March study was designed to scapegoat pro-life laws. It’s also no surprise that the claims made in the NASEM report were deceiving, at best.

First, the NASEM report states that, “requirements, such as multiple visits and waiting periods, delay abortion services, and by doing so may increase the clinical risks and cost of care. They may also limit women’s options for care and impact providers’ ability to provide patient-centered care.” The Wisconsin Alliance for Women’s Health adds that waiting periods combined with the requirement that women receive “biased information” about their unborn baby’s development adversely affect women’s health.

Anyone who has spent any time in the pro-life movement has heard countless post-abortive women say that, had they known the truth about their unborn baby, they never would have chosen abortion. Many women also say they were never told the truth about their babies at abortion clinics. Instead, their unborn children with fingers, toes, and a beating heart were referred to as the “uterine contents” or “products of conception”.

In the mid-1990s Wisconsin Right to Life put its support behind the Woman’s Right to Know Act which became law in 1996. This law requires women to learn the truth about the development of their unborn child and have a 24-hour reflection period before undergoing an abortion. Wisconsin Act 37, also known as “Sonya’s Law” was supported by Wisconsin Right to Life and enacted in 2013. This law requires that women undergo an ultrasound before obtaining an abortion, as well.

According to the Wisconsin Alliance for Women’s Health, ultrasounds and facts on fetal development are “biased information”. Of course, the real reason that abortion advocates hate these laws is that they cut into their massive profits. According to Live Action, Planned Parenthood stands to lose $12,660,511 each year because of mandatory waiting periods.[2] Similarly, informing women about the truth of their unborn child’s humanity steers women away from abortion as well as money away from the coffers of the abortion industry.

Second, the NASEM study claims laws promoted by Wisconsin Right to Life that require a physician to perform an abortion are lowering the standard of abortion care in Wisconsin.

The “Physician-Only Requirement” was one of the first protective, pro-life laws supported by Wisconsin Right to Life. Signed into law in 1985, this law prohibits non-physicians such as nurse practitioners, physician assistants, and nurse-midwives from performing abortions. 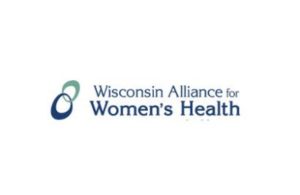 Again, because they only care about profits rather than women’s health, abortion advocates strongly oppose these laws. Per usual, abortion advocates have trotted out flawed studies “proving” it is “safe” for non-physicians to perform abortions. One such study was conducted by Tracy Weitz and was released in 2013. It is entitled, Safety of Aspiration Abortion Performed by Nurse Practitioners, Certified Nurse Midwives, and Physician Assistants Under a California Legal Waiver. Weitz’s study provided support for California Assembly Bill 154 which legalized abortions performed by non-physicians in the state.

Weitz’s study immediately came under the scrutiny of pro-life physicians. Dr. Mary Davenport, an obstetrician/gynecologist practicing in San Francisco, claimed that Weitz had a predetermined conclusion to the study before she ever began her research, saying, ” [Weitz is] a brilliant woman. She had a firm ideology about abortion access, and then she did a study that was instrumental in getting this law (California Assembly Bill 154) passed in the legislature.”

After analyzing the sampling and data methods used in the Weitz study, Davenport and her colleagues determined that they provided an artificially low number of reported complications. Davenport said, “If they’re not seeing [a complication], they’re just not finding it. They don’t want to find it.”[3]

A cursory review of the procedures performed by nurse midwives, physicians’ assistants, and other paramedical professionals shows that they are not trained to perform complex surgery.  The thought of a midwife performing a hysterectomy or a physician assistant removing an appendix is inconceivable. Why should abortion be any different?

There is another reason abortion advocates desperately want non-physicians to perform abortions: legitimate doctors don’t want to do them. A 2011 study published in the journal Obstetrics & Gynecology found that only 14% of Obstetrician/Gynecologists were willing to perform abortions.[4]

Another “finding” of the NASEM study related to their support of non-physicians performing abortions is that the prohibition of “Telemedicine Abortions,” or webcam abortions, in Wisconsin is hurting women.

Wisconsin Right to Life supported The Coercive and Webcam Abortion Prevention Act which was signed into law in 2012.  This law prohibits webcam abortions which are occurring in Iowa and Minnesota from being introduced into local communities in Wisconsin. It requires a physical exam and in-person administration of dangerous chemical abortion-inducing drugs like RU-486.

There is good reason for physicians to be involved in chemical abortions. The Australian reported the following regarding a 2011 study in Australia:

The “audit” of nearly 7000 abortions performed in South Australia in 2009 and last year found that 3.3 per cent of women who used mifepristone in the first trimester of pregnancy – when  most elective terminations occur – later turned up at hospital emergency departments, against 2.2 per cent who had undergone surgery…and the rate of hospital admission jumped to 5.7 per cent for recipients of early “medical” abortions – using drugs – compared with 0.4 per cent for surgical patients re-admitted for post-operative treatment.[5] 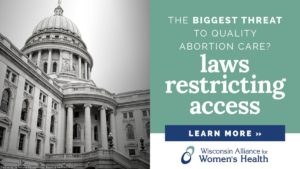 These are only a few of the spurious claims made in the NASEM study on which the Wisconsin Alliance for Women’s Health is basing their new ad campaign. While every one of their complaints is easily dismissed, there is one reason the Alliance is targeting Wisconsin’s pro-life laws: they are saving lives and hurting the profits of Wisconsin’s abortion industry.

The numbers are clear: Because of the pro-life laws supported by Wisconsin Right to Life, our abortion rate in Wisconsin has dropped over 70% from an all-time high in 1980. Our laws have helped save 170,401 lives since 1987, when records were first kept. All of this translates to millions of dollars lost to the abortion industry in Wisconsin.

There is something else very insidious about the Wisconsin Alliance for Women’s Health campaign: the audience they are targeting. According to the press release on the campaign, these ads are being run where their pro-abortion allies and lawmakers will see them:  The WisPolitics Midday podcast, plus digital ads on WisPolitics, the Milwaukee Journal-Sentinel and CapTimes news sites. Their goal? Eradicating Wisconsin’s pro-life laws and increasing their profits from the deaths of babies and the heartache of their mothers.

For 50 years, Wisconsin Right to Life has been working to protect the most vulnerable members of our society.  In addition to protective legislation, we have numerous ways that we are working to save lives as well as change hearts and minds.

Our Veritas Society uses television, digital media, and the internet to tell abortion-vulnerable young people the truth about abortion. Our Emergency Grant program provides financial resources to abortion-vulnerable women so they can choose life. Our Teens for Life, Life on Campus, and Life Camp programs teach young people the truth about life and enable them to share this truth with their peers.

The bottom line of the abortion industry is always money, and the Wisconsin Alliance for Women’s Health campaign is further proof of this. With your help, Wisconsin Right to Life will continue protecting lives and telling the truth until every vulnerable life is safe and valued.

[1]David Callahan “Who’s Who at the Secretive Susan Thompson Buffett Foundation?” Inside Philanthropy.