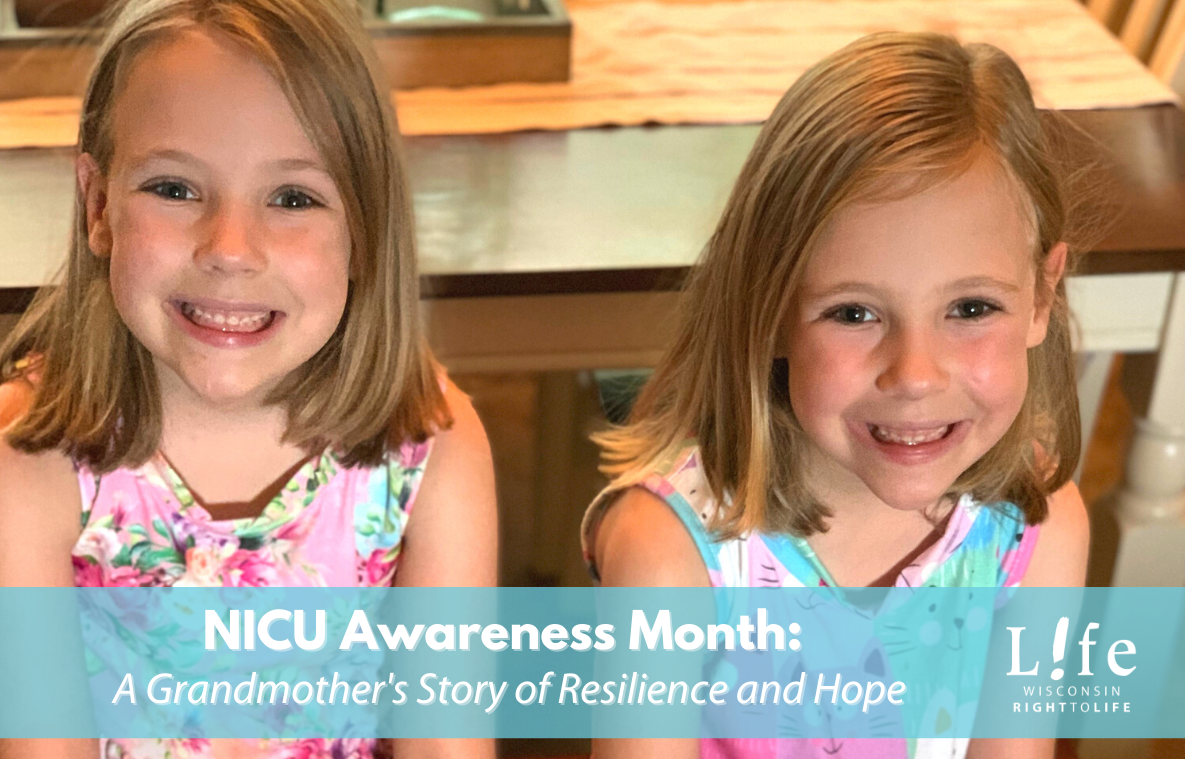 For expecting parents, the words spoken often are “We just want a healthy baby.” As they plan for their baby, the usual preparations are regular visits with an obstetrician, choosing a pediatrician, setting up the nursery, shopping for cute little outfits, deciding on a name, and eventually bringing home their little bundle of joy. For 85% – 90% of families, this is the reality. For the other 10% – 15%, their baby is treated in the NICU after birth. September is National NICU (Neonatal Intensive Care Unit) Awareness Month. Most parents are unaware of what happens in the NICU and why their baby may need to spend some time in one. Our family did experience a lengthy NICU stay with my identical twin granddaughters, and this is Sophia’s and Olivia’s story.

TWINS!! My daughter and son-in-law shared this exciting news with our family as they passed around the first ultrasound 7 weeks into their first pregnancy. When my daughter noticed my 8-year-old grandson looking intently at the ultrasound, she said, “I know the babies are very small.” He looked up and said, “So small and so loved!” At just 8 years old, he knew these tiny images were his two cousins and already so precious to us all! Soon, we were all receiving a picture every week of my daughter as she stood next to the same hanging basket of pink flowers as her tummy grew with two healthy babies.

In the 20th week of her pregnancy, my daughter was sent to Milwaukee Froedert Hospital Birth Center for her 20-week anatomy scan. After the sonographer finished the 3-hour scan, the perinatologist (specialist for multiples or high-risk pregnancies) told us the results. He said both twins were perfect and healthy! I asked if my daughter should come to him for future appointments and he said that because she was young (28 years old) and healthy and both babies were healthy, she wasn’t considered high-risk and could continue with her obstetrician in our hometown of Sheboygan.

However, at 24 weeks, labor suddenly started. My daughter was taken by ambulance back to Froedert Hospital Birth Center. She was immediately started on a magnesium drip to stop the contractions and steroid injections to help the twins’ lungs. The magnesium made my daughter extremely ill with a terrible headache, but she insisted on continuing it to hopefully stop labor. By midnight the labor stopped. We were all very relieved. An ultrasound confirmed the babies were still very active.

After three days, the perinatalogist sent her home on bed rest, except for a daily shower and very moderate activity. Three days later, her water broke and she was once again rushed by ambulance to Froedert Hospital Birth Center. She was put back on the magnesium drip and more steroids. Labor stopped again until four days later when the twins were going to be delivered at 26 weeks gestation. We were all terrified, but my daughter bravely gave birth to Sophia and Olivia. In the delivery room were doctors and nurses from Children’s Hospital Level 4 NICU. The twins each weighed only 2lbs and were 12 inches long. They were immediately intubated, placed in incubators, and rushed to the NICU for treatments and assessments.

Two hours later, we were all taken to the NICU and told that the twins were in extremely critical condition, but stable. They were in a private room together and each had her own nurse. There were many wires and a ventilator on each baby. The incubator was covered by blankets because they couldn’t handle lights yet. The doctor explained that their skin was so fragile that we couldn’t hold or caress them, just place a hand on their head and their bottom to cradle. They wouldn’t be bathed until their skin could handle it.

Life in the NICU is hard for the babies and their parents. It was weeks before my daughter and son-in-law could do skin-to-skin kangaroo care, change diapers, and bathe the twins. My daughter pumped her breast milk to be given in their PICC lines. Each day there were scares and reasons to rejoice. Each baby took her own path. Sophia was off the ventilator on day 4.  Olivia came off on day 25. I remember so well the day that both babies weighed 3lbs – it was such an accomplishment! On day 37, my daughter and son got to hold both babies together for kangaroo care. Soon, they surprised me and said it was my turn. To hold these two precious babies together for the first time melted my heart.

My daughter spent every day in the NICU with the babies. My son-in-law came evenings and weekends, and I came almost every day. My daughter and son-in-law also approved any and all treatments the babies needed to save their lives, knowing that the chance of leaving with perfectly healthy babies were slim. Loving the babies was not based on their perfection; if there were health challenges, we would handle those as they occurred. As the grandparent, I only saw how beautiful both Sophia and Olivia were from the first moment I saw them.

On January 10, 2014, (day 96!), the babies were released! Olivia needed oxygen for the next three months and both babies were on monitors. The next day we had the start of many home therapies that lasted until the twins were 18 months. Soon, both Sophia and Olivia were thriving! This is definitely due to their parents’ devotion. I believe God knew the twins needed parents that would be totally devoted to their health and development, and that is why he gave these special little girls to Ashley and Jesse! Soon we were celebrating each milestone of Sophia and Olivia, and knowing how blessed we are to have two healthy little girls – our precious miracles! Sophia and Olivia are turning 7 years old on October 6th, their parent’s 8th wedding anniversary. I absolutely adore all my grandchildren, but I admit that I probably hug Sophia and Olivia just a little tighter, because they fought so hard those first several months of their lives to live! I often say that if you spend just one day in the NICU, you will see how hard these fragile babies fight to live! I would like to thank the amazing NICU staff – the doctors, specialists, nurse practitioners, and nurses. Our nurses all did 12-hour shifts because it was best for the babies. We spent the most time with the nurses and they held us when we cried and cheered along with us every milestone. I always told them that they hid their angel wings under their uniforms.

Since Sophia’s and Olivia’s birth, the age of viability for preemies has changed from 24 weeks to now 22-23 weeks at a Level 4 NICU. I would encourage all expecting parents to find the closest Level 4 NICU, so if your baby comes as early as 22 weeks you know where to deliver to give your baby the best chance. NICUs also take full-term babies and treat them for many different issues, so having this knowledge ahead of delivery would be best. With Sophia’s and Olivia’s early birth, the doctors never did find out the reason why. So, at 5 and a half, Sophia and Olivia became big sisters to their full-term, 9lb baby brother!

The last point I’d like to make about NICU Awareness Month is about the importance of helping parents and all those who love a preemie exhale and know their feelings are justified. PTSD is very real. I know as a grandparent, it took years for me to finally take the NICU number out of my phone’s saved numbers and empty my emergency suitcase. I still have flashbacks to some of the scariest moments in the NICU and I am trying hard to let go of those. Each time I get to spend with Sophia and Olivia is the biggest help for my mind to tell my heart that everything is okay and I can exhale for good! Facebook support groups were also a huge help to us as we navigated through this uncertain time. “TwentyTwo Matters,” “Micro Preemie Parents,” and “NICU MOMS” are great Facebook groups to help you find advice, information, and encouragement from other families who have gone through or are going through NICU experiences.

God bless every NICU baby and all those who love them!