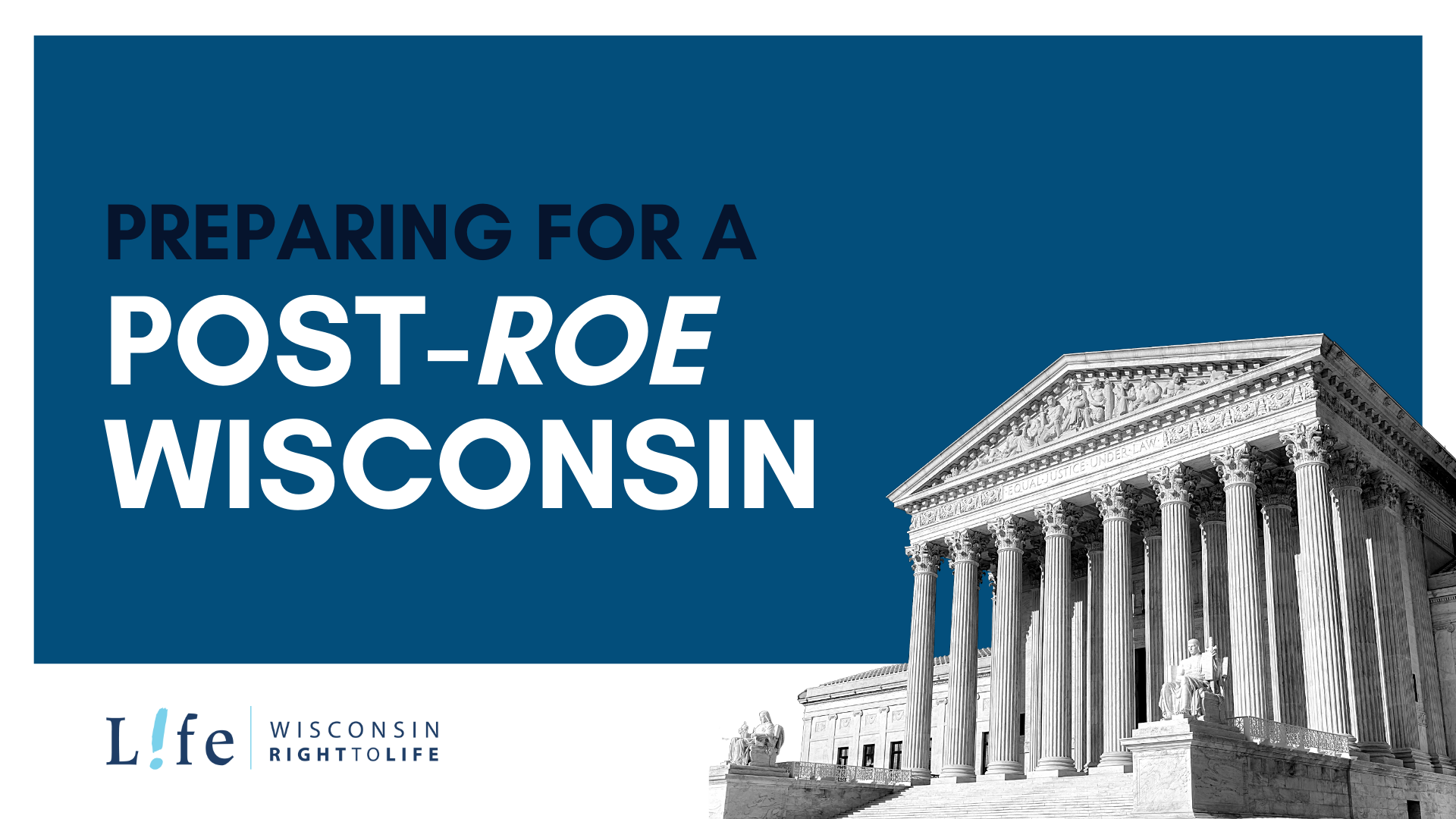 While the Mississippi law would ban abortions after 15 weeks, with some exceptions, the court’s decision to hear this case presents a truly historic opportunity for the court to overrule past rulings in Roe v. Wade and Casey v. Planned Parenthood that have allowed for the massive expansion of abortion across the country and prevented states from enacting protections for preborn children and expectant mothers.

In the decades following the court’s ruling in Roe, vast advances in science show the undeniable humanity of preborn children. Countless states, including Wisconsin, have passed laws to protect preborn children and roll back access to abortion; yet these laws, and the will of the people who worked tirelessly for their passage, have been halted by the Supreme Court’s rulings.

While the Courts arguments in deciding Roe and Casey often argued that children may prevent women from perusing careers and freedom, both society and laws have changed drastically, making the idea that women need abortion to achieve personal and professional freedom obsolete.

The Supreme Courts most recent addition, Justice Amy Coney Barrett, who is a devoted mother to seven, emphasized this point as she discussed safe haven laws and the option for mothers to relinquish their children safely and legally if they feel they are unprepared to be a mother.

Indications from the oral arguments on December 1st provide a hint as to how the Supreme Court’s justices may rule in Dobbs v. Jackson, and it seems plausible for the first time in decades that Roe v. Wade may be overturned or a new standard set for pro-life laws.

The Supreme Court’s Decision in Roe

The Supreme Court’s fateful 1973 decision in Roe v. Wade determined that there is a constitutional right to abortion, and held that states could not prohibit abortion before a preborn child is viable, therefore paving the way for nearly unfettered abortion access nationwide.

This decision is heartbreaking in its moral failure to protect the most valuable among us – the preborn – and its disregard for the value of human life. Yet, it also stands in flagrant disregard of the United States Constitution, which offers no right to abortion. Edward Lazarus, a former law clerk to Roe’s author, Justice Harry Blackmun, and a defender of abortion access wrote, “As a matter of constitutional interpretation and judicial method, Roe borders on the indefensible… The problem, I believe, is that it has little connection to the Constitutional right it purportedly interpreted.”

Where the Constitution is silent, such as in the case of abortion, the states speak. Yet, with the unconstitutional precedent that Roe set, states have been nearly powerless in crafting laws that would protect preborn children and roll back the damaging, on-demand access to abortion nationwide.

Several states have passed legislation, such as Heartbeat Acts that would prohibit abortion once a heartbeat is detected, or anti-discrimination bans aimed at protecting preborn children with Down Syndrome who are aborted at rates nearing 70%. Yet, due to the court’s ruling in Roe, these laws have been largely unenforceable. Mississippi’s Gestational Age Act stands in opposition to the precedent set by Roe as it would prohibit abortions pre-viability at 15 weeks.

As Mississippi Attorney General Lynn Fitch notes in her defense of the Mississippi law, “There are those who would like to believe that Roe v. Wade settled the issue of abortion once and for all. But all it did was establish a special-rules regime for abortion jurisprudence that has left these cases out of step with other Court decisions and neutral principles of law applied by the Court. As a result, state legislatures, and the people they represent, have lacked clarity in passing laws to protect legitimate public interests, and artificial guideposts have stunted important public debate on how we, as a society, care for the dignity of women and their children.”

In past cases pertaining to abortion access, the Supreme Court has shown a preference to take small step decisions and uphold past precedent.  Yet, in the case of Dobbs v. Jackson, the Court does not have that opportunity. The Court would have to either overturn Mississippi law, invent a new standard than the one currently set, or acknowledge that the decision in Roe has no constitutional footing.

By simply upholding the Mississippi law, the court would be forced to set a new standard of viability since the Mississippi law would prohibit all abortions pre-viability. Yet, ever-changing scientific advancements show that viability as a legal standard is unworkable. When Roe was first decided in 1973, 26 weeks’ gestation was the standard for viability. Today, children born as early as 21 weeks have a powerful chance at life, and viability is often defined as early as 21-22 weeks.

At the heart of the Dobbs case is the question of whether all prohibitions on abortion performed pre-viability are unconstitutional. Therefore, if the court rules in favor of the Mississippi law, they would also eliminate the viability line set by previous precedent. This would leave the Supreme Court with no choice but to overturn Roe entirely and return the question of abortion access to the states. At long last, the decades-long moral and constitutional failure of Roe would be righted. 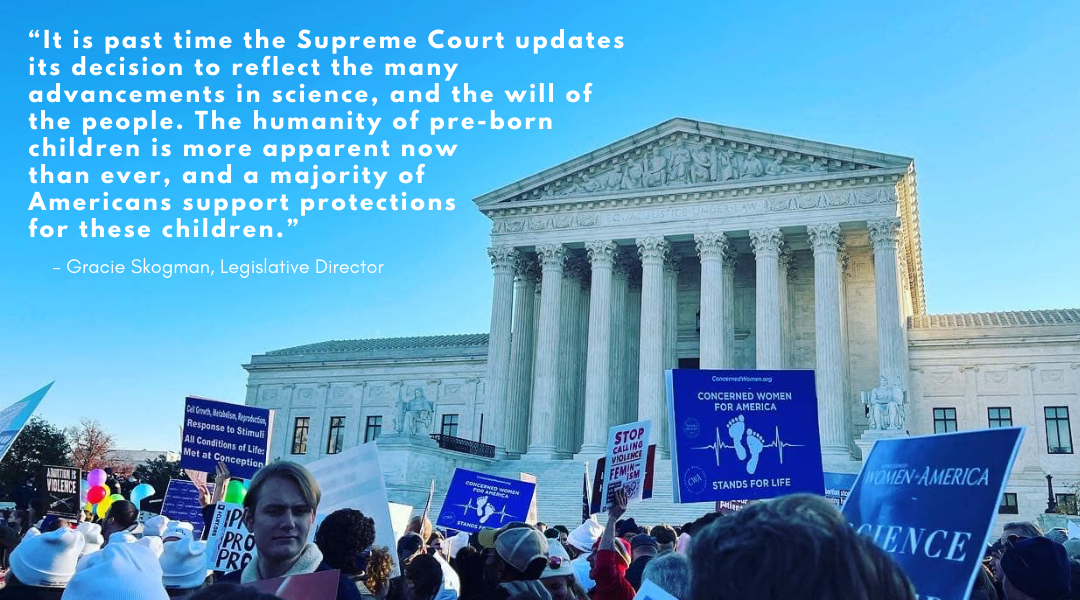 A National Future After Roe

A United States free from the burden of Roe is one that is able to truly create a culture the defends and supports life. Each state would have the opportunity to revisit past legislation and protections for preborn children and enforce the laws already passed while also crafting new laws.

The Supreme Court’s decisions in Roe imposed abortion on the American public, but has not resulted in settled abortion law. Instead, the American people have been speaking powerfully through their state legislations, with over 540 pro-life bills introduced this past year alone, of which 69 have been signed into law.

Recent polling shows that 80% of Americans believe that abortion should be prohibited past three months, a direct opposition to the standard set in Roe. It is past time the voice and will of the people are heard and reflected, and if Roe is overturned both would be possible once again at a state level.

Wisconsin is in a uniquely powerful position to defend life if Roe is overturned. State statute 940.04 provides an outright ban on abortion and would become enforceable in the absence of Roe.

While there would inevitably be unrelenting pushback to this law and challenges with enforcement, the battle to defend life is one worth fighting.  Now is the moment for Wisconsin to step forward and signal a willingness to defend preborn life, and provide support for all children regardless of circumstance, diagnosis of congenital condition, race, gender, sex, or any other characteristic.

Equally as vital is ensuring women who face unexpected or challenging pregnancies are provided the support, encouragement, and resources they need.

While abortion advocates tell women they need abortion in order to pursue their dreams, achieve their career goals, and in some cases avoid a life of hardship and pain, the pro-life movement must welcome these women with kindness and compassion. It is the pro-life movement that values both an expectant mother and her preborn child, and reminds a woman that she is courageous and capable.

Currently, there are more than 2,7000 pro-life pregnancy centers nationwide that served nearly two million people in 2019, at an estimated value of nearly $270 million. They provide services at no cost including pregnancy tests, ultrasounds, STI tests, parenting and prenatal education programs, material and financial assistance, and in some cases after-abortion support.

Women who visit these centers are uplifted, empowered, and reminded of their value and worth. Instead of being offered the “simple” solution of abortion and told it is their only option while being lied to about the lasting pain and trauma that follows and abortion, they are treated with respect and autonomy.

The need for these centers and resources will only increase in the absence of abortion access in Wisconsin, and the pro-life movement must be willing to step into this gap with love and compassion.

While I stood outside the Supreme Court during the Dobbs v. Jackson rally on December 1st, I saw thousands of people gathered in support of defending life. Women, men, young and old, doctors, professors, children, of all races and backgrounds gathered to support the preborn. An undeniably moving sense of joy was present, as if change was coming.

As we pray for the Supreme Court to make a decision in the Dobbs case that will defend life, may we remember the words of Ester 4, in which God reminds Ester that she was made “for such a time as this.”