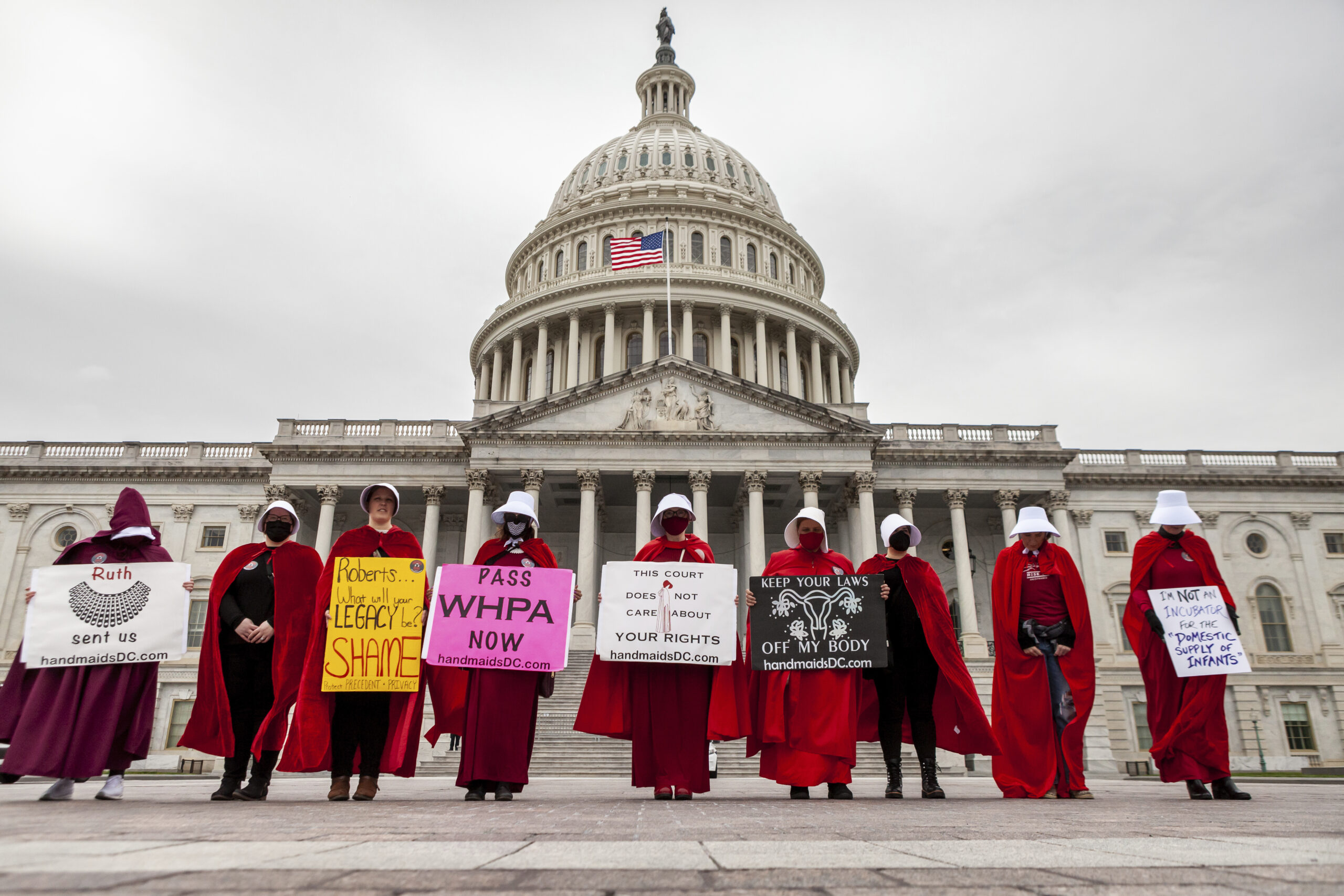 What is abortion? One would think the answer to this question would end the abortion debate once and for all, but such a thought is a figment of our imaginations. Dozens of answers exist in the minds of Americans today, each supported with different lines of reasoning. Sure, these opinions may derive from personal research, but they all stem from cultural influences, for the manner in which we speak of, learn of, experience, and advertise abortion is what creates the definition itself. Finding the true answer is quite literally life-or-death because if abortion is the intentional ending of a human life, then defining it as such and defending the life thereof is of utmost importance. Ultimately, diverse understandings of abortion in America are tainted with discrepancies, which ultimately point to truth within the pro-life movement.

“Our language is the reflection of ourselves. A language is an exact reflection of the character and growth of its speakers,” said Mexican American labor leader and civil rights activist, Cesar Chavez. Pro-life and pro-choice voices make choices about the language they use. These choices are intentional and exact reflections of their character and goals. Even the terms “pro-life” and “pro-choice” are purposeful. “Anti-abortion” carries a negative connotation that those who identify as such only want to stop abortion. By branding themselves as “pro-life”, the anti-abortion movement emphasizes their true focus, the goodness and protection of all life from conception to natural death. “Life” points to what abortion concerns, which is the taking of life. “Life” triggers positive, supportive, and loving emotions, exactly how the pro-life movement desires to be seen by the world. On the other hand, “pro-abortion” makes it seem as though the only focus of abortion activists is to provide abortion, while “pro-choice” redirects the attention to the idea that pro-choice advocates will protect a woman’s choice to decide what to do with her pregnancy. “Pro-choice” calls for a celebration of freedom and female-empowerment, paying no attention to what abortion actually is or does. The pro-choice movement is concerned with redirecting its message away from from what abortion achieves, instead to a generally accepted good: freedom of choice.

Moving beyond first impressions, the pro-life and pro-choice movements use specific rhetoric in their everyday messaging and advocacy, particularly in how they define ”pregnancy.” Across its website, Planned Parenthood consistently refers to a preborn child as a “pregnancy.” Abortion is defined as “ending a pregnancy.” Prenatal vitamins are helpful to ensure a healthy “pregnancy.” The only time they stray from this terminology is when defining what a miscarriage is. Plannedparenthood.com says “miscarriage is when an embryo or fetus dies before the 20th week of pregnancy.” Does not the word “dies” imply the embryo or fetus was once living? In this case, does not the living fetus deserve to continue its life? Later, the site returns to its typical vernacular, “feelings of grief and loss are normal after losing a pregnancy.” With this, we turn to a critical point in the abortion discussion: what is really lost during an abortion? Because a miscarriage and an abortion achieve the same end, we conclude that they do the same thing. In fact, the medical term for a miscarriage is a “spontaneous abortion.” So why are they treated differently? Why are miscarriages mourned, but abortions are an exercise of personal freedom and a right to be celebrated? The pro-choice movement must choose their words carefully to justify why a miscarriage and abortion take an emotional and mental toll on the women who experience them. On Planned Parenthood’s website they do their best to recognize the “grief” women experience after miscarriage, but clarify they are only grieving a “pregnancy” rather than a “baby” or “life.” Dehumanizing preborn children is not only that – dehumanizing – but it also fails to affirm the woman and mother, who are mourning something more than “potential life.” In this way, the pro-life movement serves woman better than their pro-choice counterparts. Pro-life vernacular does not tiptoe around nor flip-flop between euphemisms like “potential life” and “a pregnancy” in order to gain the trust of women. Rather, it recognizes the humanity of preborn life and describes it as such (i.e. baby, preborn life, etc.). The pro-life movement has nothing to hide or justify. With science on its side, it promises to care for all human life, regardless of age, location, gender, race, or ability/disability.

Let’s take a brief look at the narrative abortion advocates frequently adopt, some going so far as to dress as its fictional characters: The Handmaid’s Tale. To create a display, many pro-abortion advocates dress with red gowns and white headdresses that function similarly to horse blinders; they are handmaids, the “fallen” women who are impregnated against their will according to Gilead law, the patriarchal and theocratic regime that conquers the United States in a dystopian scenario. What began as a 1985 social critique novel by Margaret Atwood recently took the screen and vast attention of Americans in a Hulu original by the same name. This story appeals perfectly to the pro-choice movement because it behaves almost as a warning to those who fear the pro-life legislation passing today. In the futuristic world of Gilead, the United States is overtaken by a religious sect, whose goal is to re-Christianize and save the world from its infertility crisis through forced childbearing. It’s true that Attwood designed such a world by synthesizing many current events and issues she saw around the world, like infertility in China, WWII totalitarian regimes, Bolshevik religious domination, Argentinian child-stealing, history of American polygamy, and many more, as she described in her introduction to the 2017 edition of her book. Pro-choice advocates equate the oppression of women in Gilead to the oppression of women in America today. Still, The Handmaid’s Tale overflows with discontinuity and contradicting ideas. Even Attwood is sure to clarify in her book’s introduction that Gilead is a strictly fictional place, “No, it isn’t a prediction, because predicting the future isn’t really possible: there are too many variables and unforeseen possibilities.”(Atwood, XVIII)

Let’s examine two specific instances in Atwood’s book and Hulu’s adaptation that expose the same pro-choice contradictions discussed above. In the 1985 novel, Offred, the handmaid who narrates the story, remembers being pregnant with her daughter in the time before Gilead’s conquest. She recalls a beautiful memory, “Lying in bed, with Luke, his hand on my rounded belly. The three of us, in bed, she kicking, turning over within me. Thunderstorm outside the window, that’s why she’s awake, they can hear, they can sleep, they can be startled, even there in the soothing of the heart, like waves on the shore around them.” (Atwood, 103)

Likewise, in Season 2, Episode 5 of the Hulu original, a similar scene unfolds as Offred takes a private moment to intimately speak with her preborn child (conceived via rape in Gilead). In the hospital and after a miscarriage scare, she hides underneath her bed sheet and with her hand on her belly she whispers, “Now you listen to me. ‘Kay? I will not let you grow up in this place. I won’t do it. Do you hear me? They do not own you and they do not own what you will become. Do you hear me? I’m gonna get you out of here. I’m gonna get us out of here. I promise you. I promise.” Touching excerpts like these, when coming from a pro-abortion perspective, are rather perplexing to pro-life advocates, and point to a greater theme in the abortion debate. The pro-choice perspective fails to consistently deny the humanity and life within preborn children. In both scenes, Offred/June demonstrates her love for her preborn daughters. In the first she says, “the three of us,” asserting her daughter fills the position of another person, as well as naming a few of the ways preborn children prove their humanity in the womb, “they can hear, they can sleep…” In the second, the Hulu clip, we see something profoundly pro-life. With touching and empowering words, June promises to save her daughter from the terrorizing Gilead regime. Even more stunning is the notion that her daughter was conceived in rape, posing a sensitive question within the abortion discussion. Still, Offred believes that the circumstances of her daughter’s conception do not determine her humanity and that she still deserves to live and live freely.

These moments within The Handmaid’s Tale point to a deep flaw within pro-choice logic. The fact that a story like Offred’s, intended to empower women and the pro-abortion movement, is still fueled by and laced with pro-life reasoning practically reveals our innate belief in the goodness of life, and that life, in fact, begins and resides in the womb. Remarkably put by Cesar Chavez, our language reflects our interior selves. And so, we must also look beyond the intentional rhetoric used by the pro-choice movement. Sure, Planned Parenthood’s website does its best to carefully choose its language, but the candid words that escape our mouths in everyday conversation reveal our true beliefs. There is a reason we call a preborn child a “baby” and “a gift” in passing. There is a reason the topic of abortion makes us uncomfortable. Thanks to the distortion of American values, like individualism and liberty, via euphemisms and mass culture, we’ve become so obsessed with power, control, and money that we disregarded our instincts and justified the intentional taking of preborn life.

Moving Forward in a Post-Roe America

So, how can we face this culture? As we face a post-Roe America, we can surely expect this tense, and frightening climate to prevail for some time to come. First, we must understand the culture we belong to, which includes understanding the logic and argumentation of the “other” side. Responsible media consumption is essential. When consuming, consider these: 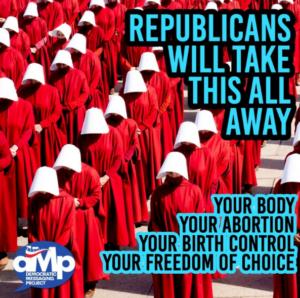 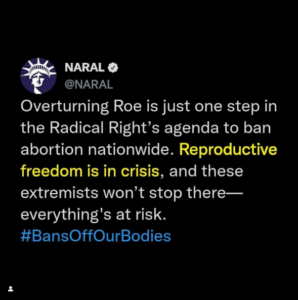 These two posts resonate with pro-choice narratives, and demonstrate the fear that with Roe gone, America is moving towards a place like Gilead, a dystopian society without freedom of choice. First, we notice how alarming these messages are. Euphemisms like “reproductive freedom”, extreme word choices like “crisis” and “everything’s at risk”, and a list of unsettling ultimatums are meant to spark outrage and demand action from the audience. Before embracing these messages, consider who is promoting them. NARAL is one of the country’s biggest pro-choice advocates, and DMP, the Democratic Messaging Program, advocates for the Democratic party and its policies. Knowing this, we must embrace the message with a grain of salt, because they have a mission and will say what they need to succeed. Essentially, what’s most important is avoiding blind consumption. Instead, see each politically or ethically charged post as an opportunity to better understand our culture. Do not avoid posts that you may disagree with. This creates further misunderstanding and closed-mindedness. In fact, the best advice I can offer is to always click on reposts/retweets, whether from pro-choice or pro-life advocates, and read the caption, page, or article they are promoting. No more swiping past. We must understand where others are coming from in order to facilitate conversation and change. However, debate over social media platforms is often unproductive and uncontrollable. And so, unless you feel particularly moved to say something respectably, and you are adequately educated on the matter, it’s best to save your words for a time where they will be correctly understood.

While NARAL warns of the threat that the overturning of Roe poses to America, DMP clearly triggers fear by featuring an image of handmaid protesters. This image behaves as a threat to American liberty if the Republican party and its pro-life policy is enforced. Do not be afraid. If we stay educated, avoid closed-mindedness, and encourage and facilitate conversation, the truth will emerge, the same truth that emerges in everyday conversation, and the same truth that is present even in the most pro-choice platforms, like The Handmaid’s Tale. We will never succumb to a Gileadean regime if we embrace truth and if we embrace each other with compassion and understanding.

“What is a Miscarriage?” Plannedparenthood.com.