Whether you see yourself as either for or against abortion, it is important to clearly understand the facts surrounding this very difficult issue.

Some people argue that having abortion legal makes it “safe” for women and that the overturn of Roe v. Wade would have a devastating impact on women’s health.

The idea that legalized abortion makes abortion “safe” is untrue. There is strong evidence that there are many complications – physical, emotional and psychological – which can occur as a result of an abortion or multiple abortions.

National statistics show that 10% of women undergoing induced abortion suffer from immediate complications, of which one-fifth (2%) were considered major. 1

A nationally recognized expert on the topic of post-abortion syndrome, and a sufferer of the syndrome, Vera Faith Lord, spoke with us for our podcast.

Long-term damage can occur from the immediate complications. One such example, identified by Dr. David Reardon, post-abortion expert, is sterility. “Researchers have reported that three to five percent of aborted women are left inadvertently sterile as a result of the operation’s latent morbidity.3 The risk of sterility is even greater for women who are infected with a venereal disease at the time of the abortion. 4

After induced abortions, premature future births are more likely. Why? During an abortion procedure, the cervix is artificially opened before it is ready to deliver the baby, and often the cervical muscle is torn. The cervical muscle must be stretched to allow the surgeon to enter the uterus to complete the abortion. If the cervical opening and muscle are torn, depending upon the extent of the tear and damage to the cervix, the muscle becomes weakened. Babies as they develop rest head down, preparing for birth. If the muscle is damaged, it may open prematurely to allow the baby to be born before he/she is fully developed. 5,6

In a study of post-abortion patients only eight weeks after their abortion, researchers found that 44% of patients complained of nervous disorders, 36% had experienced sleep disturbances, 31% had regrets about their decisions, and 11 % had been prescribed psychotropic medicine by their family doctor. 7

Research further shows that women who have had abortions are significantly more likely than others to subsequently require admission to a psychiatric hospital. At especially high risk are teenagers, separated or divorced women, and women with a history of more than one abortion. 8

Guilt is what an individual feels when she has violated her own moral code. For the woman who has come to believe, at some point either before or after the abortion, that she consented to the killing of her unborn child, the burden of guilt is relentless. There is little consolation to offer the woman who has transgressed one of nature’s strongest instincts: the protection a mother extends to her young. In fact, many post-abortive women believe that any unhappy events that have occurred since the abortion were inevitable because they “deserve it.” 9

Anxiety is defined as an unpleasant emotional and physical state of apprehension that may take the form of tension (inability to relax, irritability, etc), physical responses (dizziness. pounding heart, upset stomach, headaches, etc.), worry about the future, difficulty concentrating and disturbed sleep. The conflict between a woman’s moral standards and her decision to abort generates much of this anxiety. Very often, she will not relate her anxiety to a post-abortion syndrome abortion, and yet she will unconsciously begin to avoid anything having to do with babies. She may make excuses for not attending a baby shower, skip the baby aisle at the grocery store and so forth. 10

Temporary feelings of relief are frequently followed by a period phychiatrists identify as emotional “paralysis” or post-abortion “numbness.” 11 Like shell-shocked soldiers, these aborted women are unable to express or even feel their own emotions. Their focus is primarily on having survived the ordeal, and they are at least temporarily out of touch with their feelings.

In a study of teenage abortion patients, half suffered a worsening of psychosocial functioning within 7 months after the abortion. The immediate impact appeared to be greatest on the patients who were under 17 years of age, and for those with previous psychosocial problems. Symptoms included: self-reproach, depression, social regression, withdrawal, obsession with need to become pregnant again, and hasty marriages. 12

No matter when the abortion occurred – a few days or many years ago, the women who underwent the procedure never forget the abortion experience, and grieve for their unborn children. The grief of losing a child never ends, but for those who chose to abort, the grief, combined with guilt, make the experience very difficult to forget or forgive. Most women report that when the anniversary date of the abortion comes, they remember it as if it were yesterday.

In addition, grief over an abortion is not limited to just the woman who had the abortion. Grief extends to the aborted baby’s father, siblings of the aborted child, grandparents, aunts, uncles, and extended family.

And the impact of that grief can even extend to partners – husbands, fiancées, boyfriends and future partners unless the abortion experience and the associated grief are resolved. “Nearly half of women in one study said abortion had “significantly altered” their relationship with their partner. 13 Breakups are common,even among couples with previously stable relationships.14

Abortion is significantly linked with a two-fold increased risk of alcohol abuse among women.15 Abortion followed by alcohol abuse is linked to violent behavior, divorce or separation, auto accidents and job loss.16

Dr. Joel Brind, an endocrinologist and biologist, and a leading expert in discussing the link between breast cancer and abortion, reports the following findings:

The first evidence of a link between abortion and breast cancer was published in April 1957 in the well-known Japanese Journal of Cancer Research, (no. 48) which is published in English. So the “news” of a link is not new. The cells in the breasts that develop for lactation are called TEBs (terminal end buds) and are undifferentiated until the end of a pregnancy. If pregnancy does not occur these cells tend to grow and are susceptible to becoming cancerous. The fully developed cells, called lobules, that result from full-term pregnancy are more or less immune to cancer.

In the case of induced abortions, however, the level of estrogen exposure is much higher, for two reasons. One is that, since the unborn child is viable, there is the same increase in estrogen levels that is found in healthy pregnancies. The second is that whereas spontaneous abortions usually occur in the first trimester, induced abortions are generally performed in the second or third trimester. Even one interrupted pregnancy means several weeks of exposure to abnormally high levels of estrogen. In a pregnancy that is carried to term, on the other hand, other hormones take over in the final stages, negating the effects of the earlier exposure to estrogen by differentiating cells for lactation and killing unneeded cells.

Dr. Frank Joseph, M.D., also investigated the abortion-breast cancer link. Some of his observations are summarized below:

The link between breast cancer and abortion is there. The medical community must allow women to know the full facts about abortion and its link to breast cancer to keep women safe, not expose them to further harm.

Are you struggling with an abortion in your past?

This series is for those women and men who have suffered the pain of abortion. This ten-part video series with an accompanying curriculum is targeted at counseling professionals and lay people to lead them through the forgiveness journey after an abortion. “Into My Arms” is offered with great professionals such as: Dr. Theresa Burke, Dr. David Reardon, Dr. David Stoop, Dr. Gary Oliver, Dr. Jeanette Vought, John Eldredge as well as other healing professionals. This series has incredible stories offered by women and men that were brave enough to give us their stories, as well as inspirational music and beautiful artwork.

Silent No More Awareness is a Campaign whereby Christians make the public aware of the devastation abortion brings to women and men. The campaign seeks to expose and heal the secrecy and silence surrounding the emotional and physical pain of abortion.

Teen girls who aborted tell their own stories about why they chose abortion, what the abortion was like, and how they feel now. 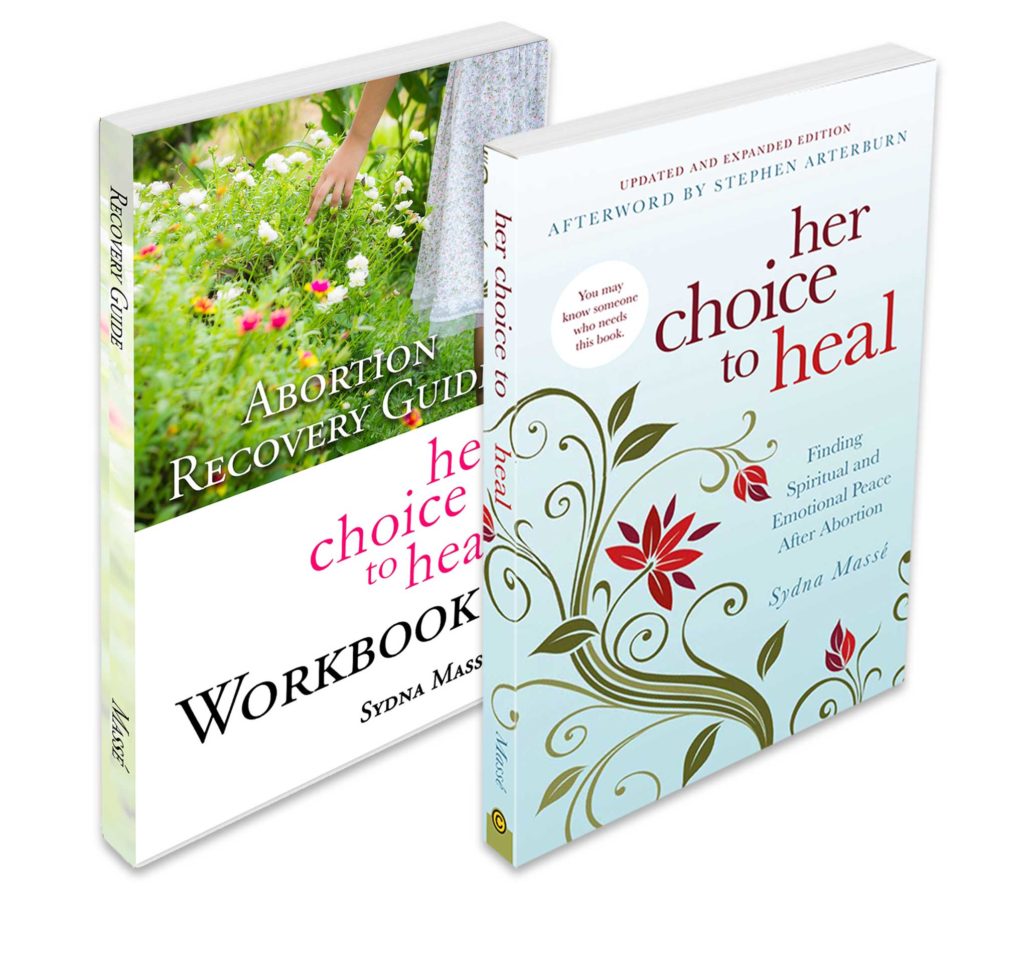 Her Choice to Heal

This book has been called the road map to healing.
Her Choice to Heal by Sydna Masse and Joan Phillips.
Published by Chariot Victor Publishing

13. Arthur B. Shostak and Gary McLouth, Men and Abortion: Lessons, Losses and Love (New York: Praeger, 1984), p. 105 notes that 25% of 75 men interviewed at some interval (varied) after their partner’s abortion said that abortion contributed to a breakup of the relationship.

14. Winfried Barnett, et al., “Partnership After Induced Abortion: A Prospective Controlled Study,” Archives of Sexual Behavior, Vol. 21, No 5 (October 1992), pp. 443-455. Barnett and colleagues found that 20 out of the 92 aborting couples, or 22% in their study group, had separated after one year. Among the 2,000 plus cases of post abortion trauma that Theresa Burke worked with, she encountered several women whose marriage dissolved as a consequence of their abortions. See Theresa Burke, Forbidden Grief (Springfield, IL;; Acorn books, 2002), pp. 208, 212, 217.

Was this page helpful to you?

If so, please consider a donation to the Wisconsin Right to Life Education Fund.  Thank you.