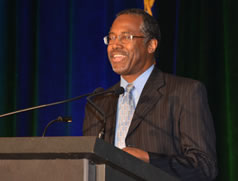 Imagine stepping into a room that looks as big as a football field.   Your eyes strain as you scan from one end to the other.  Your ears pick up the buzz around the room from a sea of people – 1,500 strong – enjoying each other’s company and eagerly anticipating the main event which is the phenomenon known nationally as Dr. Ben Carson.

On May 1, Dr. Carson was the keynote speaker at the annual Wisconsin Right to Life Education Fund dinner/gala held at the Wisconsin Center in Milwaukee.  It was a no-brainer decision to ask him to headline our event, borne out by the tremendous outpouring of support.

Dr. Carson did not disappoint.  In his gracious, easy manner, Carson recounted the story of his childhood as a “disadvantaged” child, growing up without a father.  His mother’s influence was monumental, for she simply wouldn’t let her children fail.   Throughout his career as a famous pediatric neurosurgeon, Carson operated on 15,000 patients, had a movie made about his life and received many prestigious honors.   There is even a school named after him in Milwaukee.

From a pro-life standpoint, Carson is rock solid.  He recounted the time when a woman pregnant with twins was told to abort the one who had hydrocephalus because both of the children could otherwise die.   In utero surgery was not common, but Carson did his research and operated on the affected baby.   Carson was heavily criticized for performing “unethical” surgery, but presented his data which included the fact that both children survived.  Suddenly, he was a hero!

Also present at the event were Archbishop Jerome Listecki, Governor Scott Walker and Lt. Governor Rebecca Kleefisch who all added their words of support and inspiration to a glorious evening.

This event, which raises substantial funding for the education programs of Wisconsin Right to Life, was a huge success by any measurement.   Our guests will not soon forget the massive, inspirational night which introduced them up close and personal to one of the nation’s most sought-after speakers and presented them with an opportunity to invest in saving human lives.