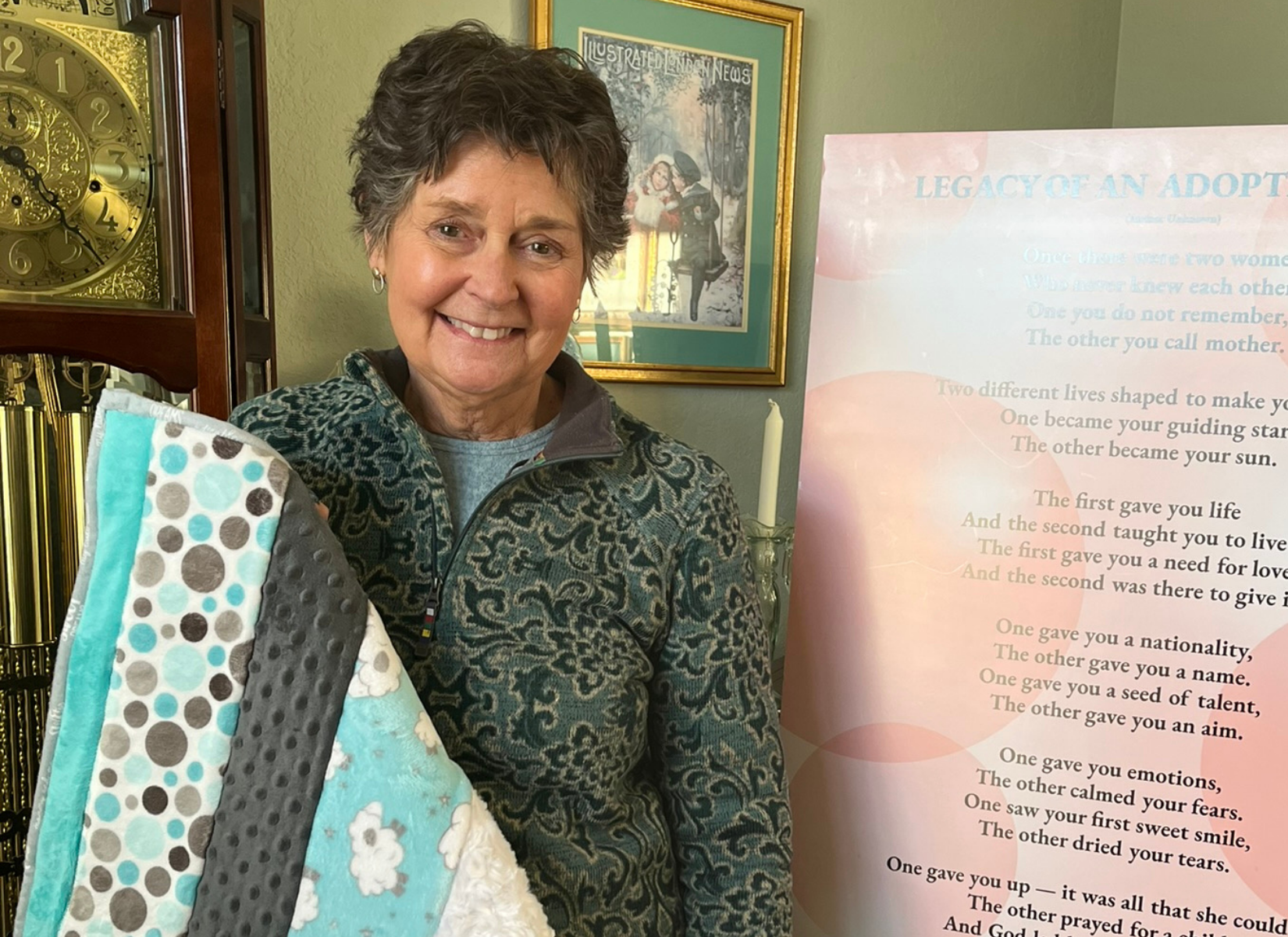 “What better cause is there than ending abortion and having more of God’s children. Everyone’s working together.”

You may have seen Laura Nevermann and her Minky baby quilts in your community. She made her first quilt to commemorate her wedding with her incredibly supportive husband Craig. Laura put her hobby on pause while lovingly raising kids and being a local teacher, but got back into it once grandchildren came into her life. However, what started as a hobby has turned into a vocation since retiring from teaching in 2013 and getting more involved with Wisconsin Right to Life.

Jefferson County chapter leader Mary Aleckson asked Laura for fundraising ideas, and Laura decided that selling quilts could be her contribution! Her first quilt booth was at the Wisconsin Right to Life State Convention and she’s since expanded to farmers markets and other community events. Laura donates the proceeds from her quilt sales to the Wisconsin Right to Life Education Fund, which distributes emergency grants to pregnant women and powers youth education programs. 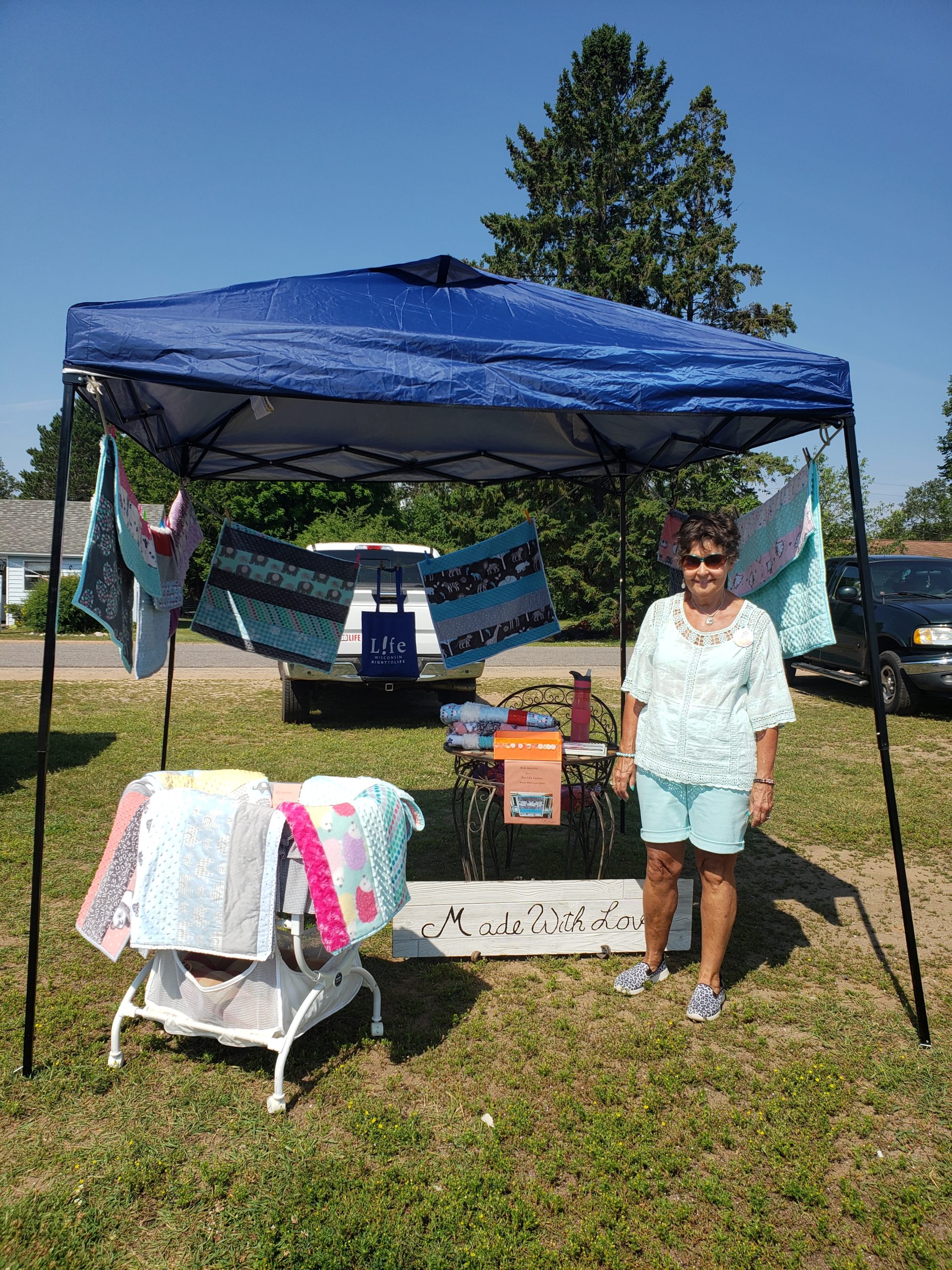 More than just generating program funds, her quilts start conversations. Each customer she meets provides an opportunity to talk about how precious life is. Through engaging in meaningful conversations with total strangers, Laura hopes those strangers will be inspired to continue a pro-life conversation with whoever eventually receives the beautiful Minky baby quilt. From tough biker men at the Wisconsin State Fair to NICU nurses stocking up for precious patients, Laura sees firsthand the desire to continue a culture of life in Wisconsin.

Not only does quilting connect Laura to the pro-life community in Wisconsin, it also connects her to her birth mom. “I’ve always known I was adopted but we didn’t have names.” Like most adoptions in the 1950s, there was no contact between Laura’s birth mother and her adoptive parents. Laura’s parents often told her how much she was wanted, and would share books like The Chosen Baby by Valentina P. Wasson to show her how her family came together.

Growing up with a closed adoption, Laura didn’t give much thought to her birth mother until she became pregnant herself and began wondering what traits may pass on to her own children. “This wasn’t so much a search for my birth mom as it was the search for Laura, to find my roots.” The placement agency for her, Catholic Charities, would only provide medically necessary information and were understandably private when it came to personally-identifying information. Laura was also cautious about her search, not wanting to hurt her adoptive parents’ feelings.

Everything changed when Laura’s adoptive mom passed away unexpectedly in 2009. As the oldest, Laura was in charge of settling her estate. “I went to the lockbox the day after she was killed, I opened the lock box, and the first thing I saw was ‘Laura’s Adoption Papers.’ She never could share it with me, but she couldn’t destroy it either, so she left it there for me to do what I will with it.” She discovered her birth mom’s full name, Vivian M. Smith. She also discovered her birth name was Mary Ellen. “No one had ever told me I had a name change. I’m in my 60s now finding this out, and I wasn’t angry or sad; I was astonished that I had this other name for a whole year before it was finalized.”

Laura renewed her search after the movie Philomena prompted her to action in 2014. It’s the story of a birth mom forced to place her son up for adoption, and her later pursuit to tell him she didn’t give him up willingly. “We were hardly out of the movie parking lot and I said ‘I gotta find her, I gotta tell her for her sake, not for my sake.’ And what mother wouldn’t?” At this point Laura’s birth mom would be about 85 years old, so she knew she should act fast.

“I had her name Vivian M. Smith with Catholic Charities of Dubuque, Iowa.” So Laura called Catholic Charities again. In 2014, they could divulge information to families if the birth parents wanted them to know. “First it was very vague, ‘you have possible relatives who might want to have contact with you.’ It was very frustrating, you can’t get any information without permission.” Laura called, started the paperwork, and was assigned a counselor. They were very slow moving.

Laura committed to searching on her own, subscribing to Ancestory.com and browsing for many months. The Catholic Charities counselor called with additional questions, but no new information. Finally a friend who had some experience with these kind of searches checked and found five possibilities! “There were so many Vivian Smiths, but the middle initial was key.” Her search narrowed down, but then Catholic Charities called and informed Laura that Vivian had passed away in 2001. “I felt like I had missed my opportunity.”

The counselor was hopeful, though. She said, “Maybe you have some siblings you could initiate contact with.” Laura ended up with a phone number for Vivian’s oldest son’s wife, but they didn’t connect. Finally, the Catholic Charities counselor recommended she call Vivian’s daughter instead, and Laura finally made contact with Kim. Kim was reluctant to engage with Laura, her mom Vivian had never made any comment about giving her oldest child up for adoption. Vivian had been a local Catholic school teacher, and having a baby out of wedlock could have surprised the local community.

Then Laura discovered an obituary for Vivian Marie Smith. “I just hit the motherload. I have all this information.” Names and children, places and dates, interests and hobbies. She still wasn’t 100% certain that this was her birth mother, but the evidence was piling up. As the obituary suggested, she had Laura in 1951 and married in 1952. “We decided to go out to Algona, Iowa, to check it out. I called the local library to see if they had school yearbooks for her 18 teaching years and they did! In a moment of unbelievable fate, the librarian told me that she had known and taught with Vivian, she was like a mentor to her.”

The librarian sent Laura photocopies of Vivian through the years: yearbooks and newspaper social columns and family relationships. As it turns out, this Vivian had collected crystals and quilted, just like Laura does! The librarian revealed Vivian had retired because of a failing memory, information which helps Laura today – she practices preventative memory care.

Laura and Craig made the trip to Algona, IA, to find Vivian’s gravestone and visit the local library. When they met with the librarian, Avon, she threw her arms around Laura. Avon said she looked just like Vivian! She directed Laura to where the family’s farm was. Vivian’s husband had died in a farm accident in his 40s, leaving Vivian to raise four children on her own. “It was very hard work, a lot of hard times in that season.”

As time went by, Catholic Charities finally gave Laura official adoption papers, “To the adoption of Mary Ellen Smith.” Laura also connected personally with Vivian’s daughter Kim. When Laura and Craig first visited Kim and her husband Doug, they were skeptical but hopeful, thinking “this could last 15 minutes or 3 hours.” They were there for five hours. She has met her three brothers in Iowa as well, and they also comment how much she looks and acts just like their mother Vivian.

Since then, Laura has connected with more of this wonderful family she’s since discovered. She was invited to Kim’s daughter’s wedding (“you talk like her, look like her, have her mannerisms”). Her cousin Judy reached out and asked how she’s related to Aunt Viv. Laura and Craig say they can’t be 100% certain of the relation, but that “we’re very confident.” Eventually, Kim remembered that her mother once cautioned her that she “can’t name a grandchild Mary Ellen, it’s already used.” The comment had come without Kim or her husband even mentioning the name as a choice for the child they were expecting.

A bookmark poem was discovered in Vivian’s Bible which reads:

“The Legacy of an Adopted Child”

Once there were two women
Who never knew each other.
One you do not remember,
The other you call mother.
Two different lives
Shaped to make yours one.
One became your guiding star,
The other became your sun.

One gave you up –
It was all that she could do.
The other prayed for a child
And God led her straight to you.
And now you ask me
Through your tears,
The age-old question
Through the years:
Heredity or environment
Which are you the product of?
Neither, my darling – neither,
Just two different kinds of love.

Today, Laura has children and grandchildren of her own, a full life of friends, faith, and hobbies, and a whole new family to enjoy – all because Vivian chose adoption.